"Google Maps is unreliable and unapproved," she said.

That's it Google Maps is the world's first mapping service and is used daily by billions of users, but it is an unreliable and unapproved solution for the Indian government. 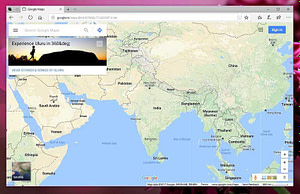 The Survey of India (SoI) recently explained that the Indian government considers Google Maps uncertified, which even its employees do not use, but acknowledged that it is a good solution for users looking for points of interest.

Swarna Subba Rao, General Inspector of India, questions the accuracy of Google Maps, pointing out that those looking for high precision are recommended to use the Survey of India maps.

"Google Maps helps you get to a restaurant or generally in a busy area that 50 meters away from being you do not feel displeased. But when we are going to put a new rail line or make channels, our topographic maps take action as we need accurate mechanical quality data, "the Inspector General said.

Indeed, India seems to be looking for ways to gain greater control over Google's maps and the information the service provides to users.

Η Google on the other hand, it is struggling to meet the demands of the government in the region especially now that the company has been at loggerheads over the borders of some countries, including Cambodia and India.

In particular, after being blamed for inaccurate information, Google has decided to launch two different versions of Google Maps, one for each country, thus presenting the required border details that are in line with government requirements.

Follow us on Google News and be the first to know about all the news.
Previous articleThe release of Google Pixel 2 "Taimen" and "Walleye" was confirmed
Next articleManjaro Linux 17.0.2 new update