One of the best known words that sounds when one wants to emphasize his persistence and determination on a subject is that he will deal with it "until the black snow falls". If we were living on HD 209458 b, this would not exist because French astronomers discovered that the exoplanet actually had black snow! 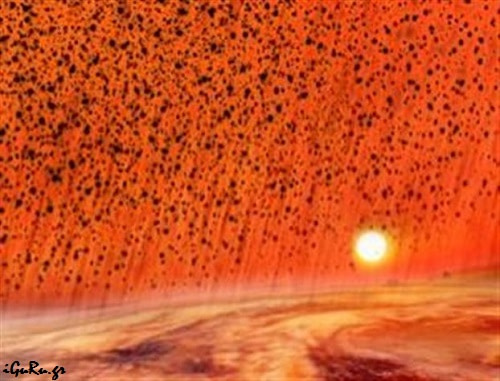 HD 209458 b is a gas giant located at a distance of 150 light years from Earth in the Pegasus Constellation. It is located very close to its parent star and completes a complete rotation around it in just 84 hours.

The formation of snow requires water which does not exist in HD 209458 b. But the very large difference in day and night temperature on the planet creates different phenomena. One of these is the creation of atmospheric currents that carry turbulent matter from areas where there is a day in those that exist night and the opposite. This (theoretically) means that the gas masses that start from the areas where there is a day solidify when they enter the night conditions.

Scientists at the Côte d'Azur Observatory in Nice have created a three-dimensional model of the atmospheric conditions prevailing in HD 209458 b. According to this, the hot gases as they go to the night areas are converted into titanium oxide flakes. Experts describe it as "black, hot, smoky snow" falling into the interior of the planet. The researchers say that black flakes are most likely the product of a mixture of titanium dioxide with another element. Although titanium dioxide has a white and light hue the presence of some other element - e.g. of silicon oxide - gives black color to flakes.

According to the simulation, upward gaseous currents send the flakes back to the upper layers of the planet's atmosphere. "The gases solidify, fall and then return to the upper layers creating a continuous cycle of snowfall. The snowstorms at HD 209458 b will not look like they are on Earth, it's like you're in the middle of a burning forest " says Vivien Parmentier, a member of the research team. The survey appears in the online archive archive archive "arxiv.org".

Follow us on Google News and be the first to know about all the news.
Previous articleIn prison, the creator of DNS Changer
Next articleHow do you wash your hands in space?

Windows XP: After 20 years, many still use them

Call of Duty: Vanguard introduces the new features of the PS5 DualSense

A group laundering money for Russian hacking groups was arrested

MacOS Monterey is now available on all Macs!

NASA has located the first planet in another galaxy!

Windows XP: After 20 years, many still use them